Jeremy booked us two nights at the LL Stub State Park near Buxton, OR.  Then he booked us one night at the Nehalem State Park campground near Manzanita, which is along the Oregon Coast.  Sounds like we had three nights of our trip taken care of, right?  (OB: for MOST people)  NOPE!  Not us – that’d be too easy.  Instead, we booked two campsites for the same night.  We wound up staying just one night at the LL Stub State Park before heading for the ocean.  Jer mentioned in his last blog entry that we inadvertently took Stevie off-roading on our way in to LL Stub.  This was because our GPS insisted that the most direct route to the campground was closed.  Once we’d maneuvered our way up and down the gravel back road and were settled in our spot, Jer googled the information and found out that the road is indeed closed, but not until after the entrance to the state park.  (JB: it’s too bad Google didn’t exist that morning.)  Needless to say our exit from the park was MUCH smoother than our entrance 😉 .

Ah well, nothing like a little off-roading to put you in the mood for a day at the beach, right?

JB: Nice try, Jenn, we STILL aren’t taking Stevie onto North Beach when we get to Haida Gwaii.

OB: Christ, now she’s the one trying to get us stranded.

By now, we have a fairly well-established routine when we arrive at a campground that involves getting the dogs piddled, watered, and fed as well as getting Stevie settled and hooked up.  But, the love of the ocean runs deep for both Jeremy and myself, so when we arrived at the Nehalem State Park campground, we barely managed to throw Stevie into park before climbing over the dunes to breathe in the beautiful ocean air.

JB: Hey, Dumbass, you might want to at least plug in and switch the fridge to electric to avoid a case of salmonella poisoning.

Jer: You’re sounding a bit like the dad on That 70s Show.

JB: That’s because you’re acting like a dumbass, Dumbass.

We hit the beach, and OH MY!!!  What a breath-taking place to experience.  The beach stretches for ages and feels a lot like the beaches on both Haida Gwaii and on the West Coast of Vancouver Island between Tofino and Ucluelet.  Except for the climbing up and down the dunes to get there – talk about a great leg workout.  (OB: you should really workout more.  And plan and prep every morsel of food you ever put in your mouth.  And workout more and differently and better than you already do…. Ooooh, look!  CHOCOLATE!) 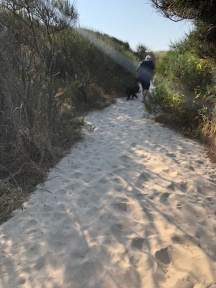 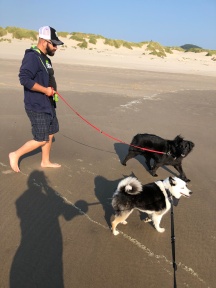 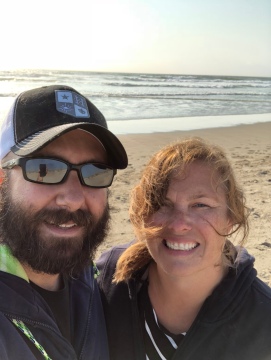 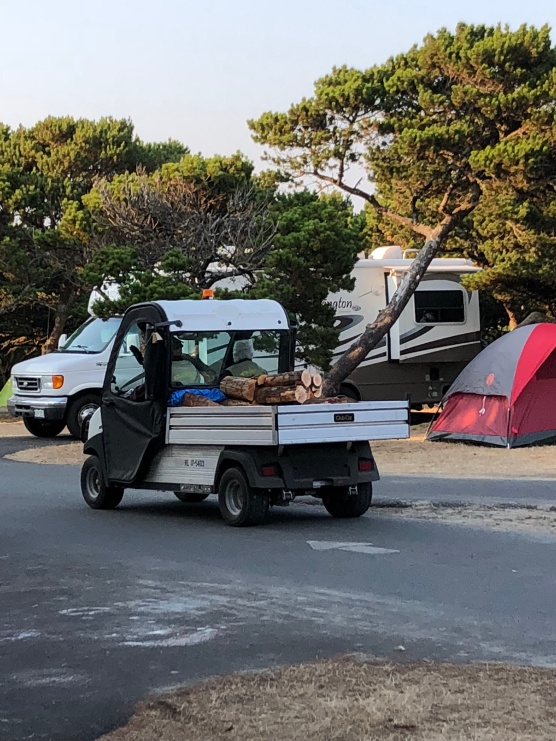 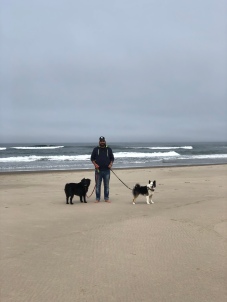 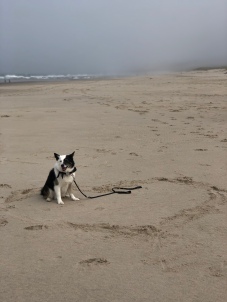 There were a few people who had their dogs off-leash, but we weren’t willing to risk it in case Saela took off after a seagull.  She was pulling pretty hard on her leash, determined to keep us safe from any and all kinds of ocean birds.

Whenever we visit beaches and oceans, our conversation goes something like this:

Jenn: Me, too.  Can you get a job in (insert current beach location)?  Can I?

JB: Sure, Jer you can work at McDonalds… except they don’t have them in these small seaside towns ya dumbass

OB: you know The BIG ONE will hit as soon as you move back to any Coast, right?

I also used Stevie’s oven for the first time on this leg of our trip to make a blackberry-apple crisp out of the fresh blackberries I picked when we stopped to see the Bonneville Lock & Dam along the Columbia River.  Of course, I just *had* to spend half an hour perusing the antiques mall in Seaside, OR to find the perfect Stevie-sized and era baking dish for the job!  Her oven worked well and the crisp was enjoyed beside the campfire along with a glass of wine.

Side bar – one of the best camping hacks we gleamed from Auntie Pat and John was to bring along TV trays to set up between our zero gravity chairs (the chairs are another great hack, courtesy of our neighbours, Dave and Laura).  Aw, shucks…. that meant I had to wander around antique stores looking for TV trays before we left, too!

One of our favourite moments at the Nehelam State Park campground happened when we heard the chime of a bell as a little truck drove by.  The man driving was pulling a string to ring the bell announcing the firewood truck.  All you had to do was call out to them or meet them on the road and you could buy firewood.  It’s like camping’s version of an ice cream truck!

The next morning, we spent more time walking along the beach before packing up and heading out.  We even remembered to write the obligatory sand-writing keepsake and take photos.  Spoiler Alert: more beaches to come equals more sand-writing photo ops!  (OB: Because no one else has ever thought to do that before.  Aren’t you clever?) 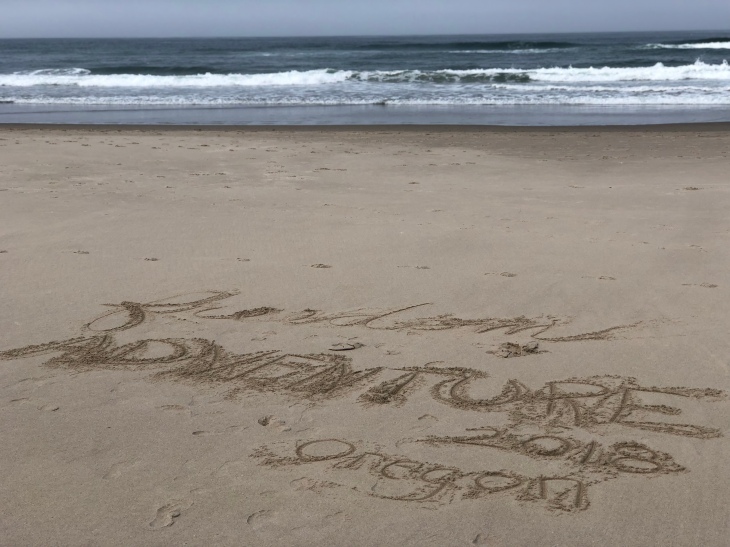 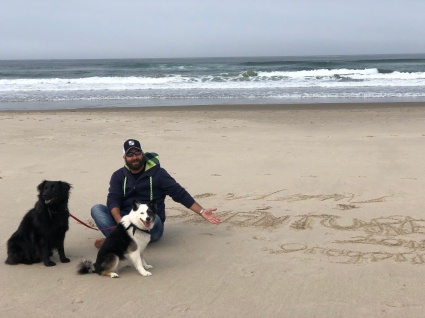 The rest of Day 9 was spent driving to the American Sunset RV and Tent Resort near Westport, WA.  We followed the coastline.  Many of the views that took our breath away on the way in were shrouded in fog as we drove out, but even the fog banks provide their own beauty.  In Astoria, OR we crossed the “longest continuous truss bridge in North America” known as the Astoria-Megler Bridge ; it is about 4 miles/6.5km  long!  We officially entered back into Washington State as we exited the bridge and continued along the US 101.  We stopped for gas in Seaview, WA and while walking the dogs, I noticed a brewery across the street.  Seemed as good a time as any to sample some brewskies.  We parked Stevie and went in for a taste at North Jetty Brewing.  While they don’t serve food themselves, there is a food truck parked beside them and you’re welcome to bring in outside food to enjoy alongside the beer and peanuts.  Jeremy had a pint of their Semper Paratus Porter and I tried a sample flight that included: Another F’ing Raspberry Hefe, La Sirena Mexican Lager, Seaview Summer Ale, and the UnderCurrant Dark Saison.  We each enjoyed our choices and left the brewery with a hat for me, a shirt for Jer, and a free sticker to add to Stevie’s bumper! That makes a grand total of TWO stickers! (OB: record setting for least-worthy of mentioning)  Our first sticker is from one of the Calgary bands our friend Navarro is in, called Steel & Timber. 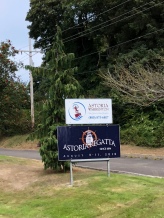 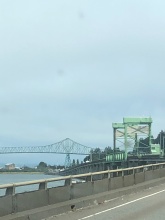 While Saela and Pepper are growing accustomed to receiving love from people we’re meeting along the way, we were super excited that Stevie received her first lovin’ at the American Sunset site!  We met a lovely couple named Bob & Nita as they rode their bicycles by us.  I complimented Nita on her bike and mentioned that we weren’t sure if we’d be able to mount a bicycle rack onto our bumper.  She immediately invited me down to their unit (also a Class C model, but a much newer and sleeker 2016 version). Whilst chatting about the bike rack, they invited us in to tour their unit and meet Timmy, their traveling kitty cat.  We had bed-and-bath-space envy as they showed us their unit.  We said, “if you’d like to check out what 1978 looked like, c’mon down!” and they enthusiastically accepted the offer.  They were so kind with their glowing reviews of Stevie’s space and Bob came back later with the perfect camping multi-unit tool for each of us.  It’s a pen, screwdriver, stylus, ruler, and a level all in one!  And they’ve even personalized it with their name and contact information.

JB: you guys wrote the blog site on a scrap piece of paper for them.  How lame is that?

OB: you totally should have had something personalized.  Or at least printed some cards off the computer or something.  Bob and Nita know what they’re doing.  You guys are such newbies. 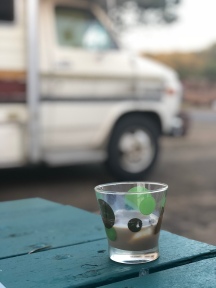 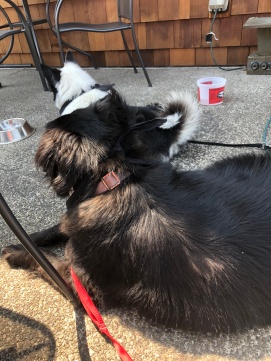 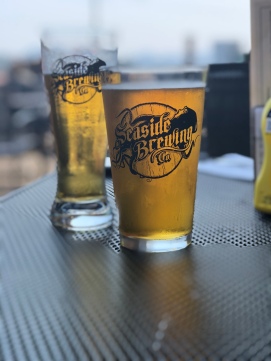 View all posts by jenniferjellema